Steve Bailey joined the BBC in 2007, having spent a total of 12 years in commercial radio, working in cities like Manchester, Stoke On Trent & Bradford.

Since then, amongst other programmes; he’s presented the extremely popular ‘Steve Bailey’s Big Drive Home’ on BBC Radio Leeds, and the highly successful ‘Steve Bailey’s Yorkshire Early Show’, which is currently networked on the BBC across Yorkshire and the North Midlands. 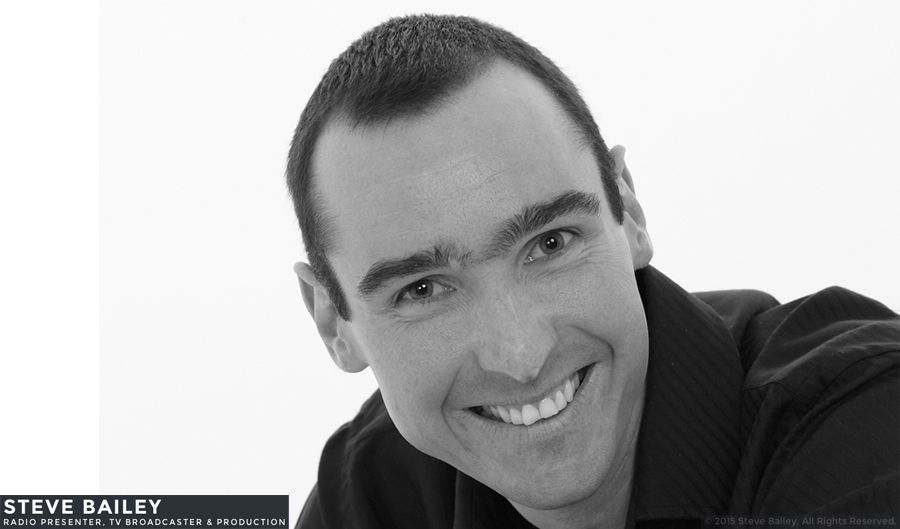 He began his broadcasting career at Signal Cheshire (now Imagine FM) in 1995, fronting the award winning ‘Late Night Love Affair’. He continued there until 1999 when, after presenting evenings and afternoon-drive, he thought it time to pursue his teaching ambitions.

However, not long after leaving radio to teach Secondary School Science and PE, Steve realised that he missed the buzz of live radio, and after a number of years, when his year group left, he left too.

“It was one of the most difficult decisions I’ve ever had to make. I’d always wanted to become a pastoral deputy head, and at that point in my career I had a choice; to return to Year 7 as a Head of Year – a step away from my goal, or leave and go back to radio – I really wanted to stay but then realised that radio wouldn’t wait for me. I’d already left the industry once and I was aware that the window for me getting back into the business could be closing with age”.

So, tempted away from the teaching profession, Steve joined Signal 1 in Stoke On Trent in 2001 where he loved every minute of presenting one of the Top 20 Drivetime Shows in the country. He enjoyed a short over-lapping spell at 1458 Manchester based at Salford Quays, before moving to ‘The All New Pulse of West Yorkshire’ where he enjoyed great success, presenting every show, culminating in Breakfast for his last two and half years there.

In Summer 2007, Steve signed with the BBC to host Drivetime for BBC Radio Leeds, one of his key broadcasting goals had been realised, from there it was to BBC Radio York, and then BBC Radio Sheffield in 2013, from where he presents the networked ‘Steve Bailey’s Yorkshire Early Show’ across Yorkshire and the North Midlands.

A Passion for Music and Education

A passion for music has been a big part of Steve’s life since he was a young lad, he plays guitar and keyboard and has a wide ranging taste in music. Steve also has a deep interest in teaching and remains actively involved in the profession.

Steve has spent a number of years as a Scout Instructor, enjoys Rugby League, walking with his very over-enthusiastic Weimaraner, and loves rock climbing and mountaineering; just as much as socialising, dining out and of course, his passion for music!